StoryCorps on HealthChangers Podcast: Palliative Care and the Tale of Two Fathers 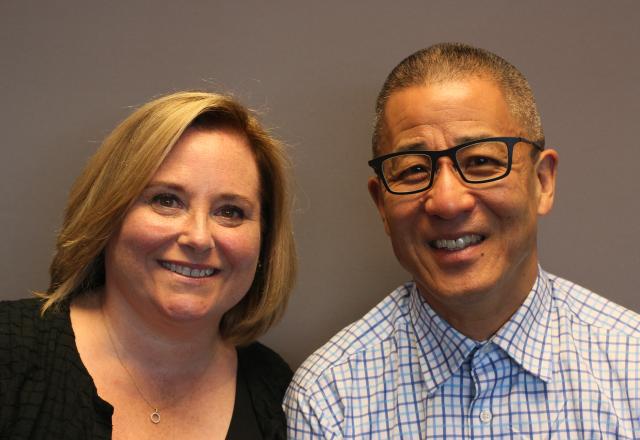 In this episode of HealthChangers, we’re taking some time out from our usual podcast to turn the focus to the people and organizations behind Cambia’s Cause to change the way people experience health care. In 2017, Cambia celebrated its Centennial. To mark the occasion, we invited StoryCorps to come in and host one-on-one conversations with employees, stakeholders, community members and other friends of Cambia. Their stories bring to life the many meaningful ways change can happen in health care.

When Peggy Maguire’s father was diagnosed with lung cancer at 48 years old, it came as a complete shock to her family. They did everything they could to fight the disease, treating him with aggressive radiation and chemotherapy. However, they felt as if “his final days were very medical in nature” and felt residual guilt afterwards, wondering if there was something they could have done differently.

Peggy's experience has fueled her passion to improve awareness of what palliative care is and how it can change the way people living with serious illness - and their family caregivers - experience health care. In this interview with StoryCorps, Peggy shares her story with Dr. Tony Back from the University of Washington.

Peggy Maguire: When I was 23-years-old, my father who was so important to me and just an amazing individual, was diagnosed with lung cancer that was quite advanced, and he was only 48-years-old. It was a complete shock to us. We had no idea what to do or how to deal with it. No one had ever been ill in our family before. Our instinct was to really fight the disease with everything that we had, and we were just on this path of radiation and chemotherapy and went from seeing a person that was very vital and joyful go to a person who was really incapacitated by the treatment that he received. In hindsight, I realized his final days were very medical in nature, and I realized that could have been different.

PM: Our family was left feeling a bit broken after that situation, and there was residual guilt about could we have done something differently? Was this really a fitting end for a person who had been so vibrant and so loving all his days? I didn't know that palliative care existed at that time. None of us knew that there was a different path.

Dr. Tony Back: I don't think I knew that story. As an oncologist, it makes me sad to think about all the people I've treated who've had stories just like that. Where I think in the early part of my career, I just didn't realize what was possible and I'm sure treated lots of people in that way and thought that was just the best that was possible.

PG: As a family member, you're trying to do the best thing that you possibly can to show your love for this person.

PG: I've come to appreciate the importance of advance care planning so that for family members, knowing that you are carrying out the wishes of someone else rather than trying to figure out what's important to them, makes all the difference.

TB: Yeah. It makes it so much easier. Of course now, at this point in my career, I have this keen appreciation of just how hard family members try.

TB: What I realize now that I don't think I knew early on in my career was that families are working so hard, and I wish I had known that earlier.

PG: Yeah. I have what I call “a tale of two fathers” because if you fast forward several years to my father-in-law's experience with end of life, by this time, I was educated about palliative care, and I knew how it could change the experience for people. My father-in-law was in his 90s, and he had several conditions ocurring at the same time. He was admitted to the hospital for fainting one day, and the physician on call suggested a stint to keep his heart beating. I immediately said, "Ask for a palliative care consult," and my husband did that. He was able to really help his family and his father make decisions that created a more peaceful and nonmedical experience regarding end of life instead of fighting death with everything we could. In my family, we were trying to fight the inevitable. In my husband's family, there was more of an acceptance, and then, how can we make you comfortable, and how can we help you? It was a very different experience, and I'm blessed to have had both.

Produced by Gretchen Kilby with interviews recorded by StoryCorps, a national nonprofit whose mission is to preserve and share humanity’s stories in order to build connections between people and create a more just and compassionate world. Learn more at storycorps.org.

Cambia Celebrates Veterans Day By Honoring Employees Who Serve
Cheryl Pegus recognized by Fierce Healthcare and the She Powers Health Awards
Employee Impact: Building a More Just Society by Empowering Latinas to Lead
Back to Top